The first few days in the critical pod in the NICU were really a blur.  Since Phil was still suffering from a sinus infection- I was the only one allowed in to see her. 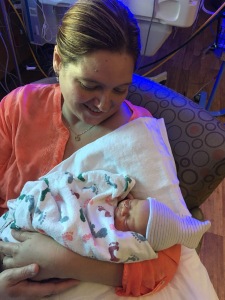 I remember holding Ava for the first time when time literally just melted into nothingness.  I could have stared at her all day and it would have seemed like only a few seconds.  There was an instant bond with her.  From the moment I saw her little face through all of the tubes- she was mine.  I was shocked by how that maternal momma bear kicked into overdrive immediately.

Ava’s birth mom loved her dearly.  I know she still holds her in her heart.  She never held her, but watched as they whisked her away to get her breathing and check her out.  They later asked if she wanted to hold Ava.  She said it was already too hard to watch her leave that room. . .she couldn’t bear to say goodbye again.

That is love folks.  She watched a part of her own heart be ripped away and for the sake and love for this little girl- she chose a family who would wrap her in their family as their own.  She chose love and life over comfort and solace.  She chose us.

We never met.  She was going through withdrawal from the drugs that held her captive and meeting us was just too much.  She endured and suffered and waited the required 48 hours of counseling so she could sign the adoption papers allowing us to become Ava’s parents.  She truly wanted the best for that little girl.  And I will spend the rest of my life trying to live up to that trust.

Those 48 hours were a tilt a whirl of peace, sorrow, joy, and fear.

It was during all of those 48 hrs of waiting when we lost four other babies we were to adopt.  So the fear started creeping in the closer the signing time approached.

That was the time the adoption agency was meeting with Ava’s Birth mom to sign the termination papers.  9:00am.  We’ve had times set before and 10, 20, 30 minutes pass and no answer.  Only to find out later that we would not be taking home a little one.  So knowing I would most likely throw up around 9:01am. . .I decided to go to our puppy nursery and socialize our newborns to keep busy.  I had my phone and texted Phil as our agency texted saying she was heading up the elevator.  To put our minds at ease- she let us know the birth mom was expecting her.  We were crying.

Phil was at work feeding cows and I was walking into the puppy room when the momma dog, Cupcake, our chocolate lab greeted me at the door.  I let her out and as I approached the whelping box I started counting.  1, 2, 3, 4, 5. . .”where is 6?”  I saw little legs and he was on his tummy.  He wasn’t moving and was warm.  I saw Cupcake had been laying in the corner where I found him.  She had laid on him.  That big momma body was too much.

At the exact moment Ava’s Birth mom was signing her papers. . .I was giving CPR to a puppy.

My phone lit up with a text.

Ava’s Birth mom had signed.  We were now her parents.  It actually happened.

I called Phil and he answered immediately.  “She signed!  She signed!!!!!”  We both wailed and hollered and cried and praised Jesus together!

I then spouted out. . .”But one thing. . . one of Cupcake’s puppies died.”  I’ll never forget this as long as I live.  Phil wasn’t surprised at all.  His reply?  ” I didn’t expect today to happen without loss.”

Loss.  Oh too true.  From the moment we announced we were embarking on the adoption journey- we suffered incredible loss.  Animals, puppies, friends, neighbors.  The incredible way God used each of those moments allowed us to feel the breadth of the sacrifice of adoption.  Adoption is beautiful and love and loss.  People forget. . .or want to forget the loss.  Jesus endured loss, God endured loss to adopt us as His children.  We too must endure loss when adopting.  The birth parents endure loss.

There is sorrow laced in joy.

I ran back into the house and one by one, grabbed each of our children and told them the good news. . .”she signed!  she signed!!!  Ava is ours!!!”

“Really?” my Matthew asked.  “Really!”  He cried.  They all cried.  This journey was a family journey of suffering and praying and hoping and losing and hoping again.  It was a time when our family grew stronger in our walk with God and closer together.  The kids were already in love with a child they had never met.

Phil received the clearance to see Ava!!!  Finally!!!!  He had seen pictures and video and Facetimed. . .but he was finally going to see his baby girl.  He just had to finish his work load and then would go up with me later that evening.

I, on the other hand, was heading up to see my little girl and try to get her to eat!

I prayed for safety as the tears filling my eyes made it difficult to see while driving.  I-35 was never more clear as I tried to keep my speed down heading to Ft Worth’s Baylor All Saints.

The music was blaring and the angles were praising God with me as I sang through breathless tears.

Reaching the off ramp, I came to a halt at the stop light where I noticed a homeless man.  Rugged and dirty- he turned to me and smiled.  I reached my hand into the back seat and into my purse.  Now, I didn’t have any money with me because every morning on that same overpass there was always someone with a sign asking for money. Each morning I would reach my hand back and feeling the rough paper money- I would grab a few bucks. . .well a five and a few ones and hand them out the window.  It was beginning to bewilder me that even though I never refilled my purse. . .I was always grabbing the same five and few ones.

Without looking. . .My eyes met this man’s. . .I reached my hand back into my purse knowing full well I had nothing and grabbed a five and a few ones.  As soon as my hand closed a fist around them. . .the man smiled.  It was Jesus.  I know it was my Jesus.  Standing on an off ramp, rugged and dirty to the eye. . .His eyes were a beauty I could not describe.  Each morning he took on a different look. . .but that morning, I cried and smiled and rolled down the window and handed what I had.  His hand covered mine and he said, “God bless and be with you my child.”  Although I had been driving up there at least twice a day for 2 days and had seen a person on that off ramp. . . I never saw anyone again after that.

The joy!  I can’t describe the joy of Jesus to you.  Yes, I was overjoyed knowing we had our little girl.  But knowing God the almighty listened to my little prayers. . .and took joy in my joy was more than my heart could handle.  The joy bubbled over into crying and love for anyone who crossed my path.  That is God people.  His love fills our hearts so we overflow with love and kindness and compassion towards others.  I imagine meeting God face to face one day will be so overwhelming that we will fall on our faces.  The joy. . .oh the joy!!!!!

I speed scrubbed at the NICU entrance and practically ran to Ava’s new pod.  “Ava. . .Ava Beth,” I whispered in her little ear.  She opened her eyes.  She knew I was her momma.

I snapped a selfie of her and made the announcement public.

I was so excited for Phil to meet our little girl.  We scrubbed in and I saw it on his face as he saw the critical unit where Ava started out.  It was the spitting image of the same set up our son William had been before he passed away.  My hand held his and we smiled at each other.  Beauty from ashes.  We walked down the hall.

Ava was a little baby. . .but she literally disappeared in Phil’s big strong hands.  He was in love from the moment he learned about her.  What a dream come true.

We spent the next two weeks experiencing the ups and downs of the NICU.  We had good days and bad days and let downs and hope.  But after two weeks, we signed our part of the adoption papers and were walked out of those NICU doors.  This time, with a full car seat!!!!  Ava was coming home!!!!

Recipes showing step by step directions with pictures and a printable recipe card.

A girl and her best friend.

blogtherapy: yearning for God despite myself

A Christian Worldview of Fiction

There are a lot of people around who can’t wait to tell you what you’ve done wrong, but there aren’t many fathers willing to take the time and effort to help you grow up. (1 Cor 4:15)

"so that what is mortal may be swallowed up by life"

Shoes On The Wrong Feet

There's a fire over here, everyone panic! And other ramblings...

this is... The Neighborhood

the Story within the Story