Today is February 1st, which means we are going into a month surrounded by everything “Heart.”

Valentine’s Day is upon us and along with the pink and red, we bring awareness to other things heart such as Women’s Heart Health, heart attack prevention, signs and symptoms of a failing heart.  We see the celebrities and political pleas to learn more about the heart as a woman.

But this month, I’d like to bring awareness to CHD’s, or Congenital Heart Defects which is actually something very close to my own heart. 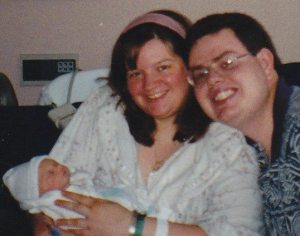 A Congenital Heart Defect is an abnormally formed and functioning heart.  Many CHD’s are now detected prior to birth through routine sonograms, however, many are not detected allowing babies to go home with life threatening defects.

In 1997, our son William was born with Hypoplastic Left Heart Syndrome (HLHS) which went undiagnosed until it was too late.  As a result, William suffocated and died.  If only his echocardiogram was performed, we would have had options.

We have learned so much about HLHS over the past twenty years, but not enough to prevent it or in many cases successfully treat it.  Raising awareness means getting a dialog going about demanding prenatal fetal echocardiograms and neonatal echocardiograms as routine testing prior to any discharge from the hospital.  Early detection means a greater chance of success in treating and beating CHD’s.

We know this first hand as our youngest son, Nathan received an echocardiogram prior to having stomach surgery at one month old.  His testing revealed a heart defect known as Fenestrated Atrial Septal Defect, which is basically multiple small holes in the heart.  He is doing great right now and is just 2 weeks away from his next echocardiogram to see how he is progressing.

After the death of William, each of our children received routine echo’s to rule out any CHD’s.  Unfortunately, many babies are still being sent home with dangerous and life threatening CHD’s.

We talk about our son’s death not to scare parents, but to make you aware that CHD’s are more common than you think and prevention can save lives.  Please take our experience and tragedy as an opportunity to start a dialog about bringing testing to light and making sure that each parent makes it their own priority to insist on these tests prior to leaving the hospital with that beautiful brand new baby.

Let’s keep February a heart month by having a heart for those living with, fighting and overcoming Congenital Heart Defects!

Recipes showing step by step directions with pictures and a printable recipe card.

A girl and her best friend.

blogtherapy: yearning for God despite myself

A Christian Worldview of Fiction

Searching for my truth...

A journey to full awareness.

There are a lot of people around who can’t wait to tell you what you’ve done wrong, but there aren’t many fathers willing to take the time and effort to help you grow up. (1 Cor 4:15)

"so that what is mortal may be swallowed up by life"

Shoes On The Wrong Feet

There's a fire over here, everyone panic! And other ramblings...

this is... The Neighborhood

the Story within the Story